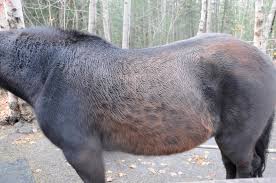 Are horses with Cushing’s disease (pituitary pars intermedia dysfunction ; PPID) more susceptible to worms? If so, they may need special consideration when developing strategies for controlling internal parasites.

Dr Dianne McFarlane and colleagues compared the response to anthelmintic treatment on fecal egg counts in healthy horses and those with Cushing‚Äôs disease.

Twenty-nine healthy horses (ranging in age from 4 to 35 years ) and 13 horses with PPID (13- 33 years old) were used in the study. The presence or absence of PPID was confirmed by clinical signs and plasma alpha MSH assay (reference range for normal horses <35pmol/L; PPID horses e45pmol/L)

The researchers performed faecal egg counts at 2-week intervals before and after treatment with ivermectin.

At 2 and 4 weeks after treatment with ivermectin all horses in the study had negative fecal egg counts.

Horses with PPID had higher egg counts than did healthy horses, both before and at 6 – 12 weeks after treatment. This difference could not be explained by the PPID horses being older than the control horses, as the researchers found no correlation between age and fecal egg count.

A fecal egg count greater than 200 epg is often taken as an indication that anthelmintic treatment is required. In this study 6 of the 13 horses with PPID reached the 200epg threshold by 10 weeks after ivermectin treatment. In contrast only 2 of 25 control horses had reached the threshold at the same time – a difference that was statistically significant.

The findings suggest that horses with PPID may pose a risk for pasture hygiene if not managed properly.

On the other hand, age alone does not appear to increase the horse‚Äôs susceptibility to parasitism. However, the researchers point out that only a small number of horses were involved in that analysis. More work is required to confirm that older horses do not need treating differently to younger horses when it comes to deworming.