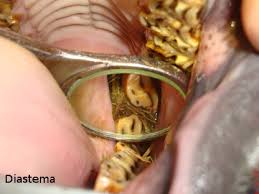 A diastema is a term that refers to the space between two teeth. In horses, especially geldings, the space where a bit fits, i.e. between the canines and the first cheek teeth, is a wide diastema. Technically there is no space between the cheek teeth — at least there shouldn’t be. However in some cases a space develops as horses age and this space can be a source of dental issues.

A gap at the gum line allows food to pack between the teeth. If the space does not extend to the chewing surface of the teeth, it is known as a closed diastema. This circumstance can allow for decaying feed material to putrefy and results in decay that can cause serious consequences.

In modern day discussions, diastema (the plural of which is “diastemata”) has become an accepted term for the abnormal accumulation of food between the teeth. This can be a painful condition and can, if untreated, lead to loosening or even loss of teeth. This condition is often difficult to identify immediately since the cause is usually progressive as the horse ages.

Over time, horses’ teeth continue to erupt and the roots are smaller than the main tooth. As the roots of the teeth erupt in later life, the gaps develop, allowing food to become packed between the teeth. A diastema can also become a source of problems when teeth are displaced or fractured. While many horses develop closed diastema as they age, some may acquire the condition at a young age when teeth erupt or “come in” incorrectly.

Pain occurs when food gets lodged in these gaps, pushing on the teeth and nerves in the mouth. Over time, the food can compress the gum, leaving a dip when the food is removed and sometimes exposing the nerve. Other than pain, symptoms of diastema include difficulty eating and chewing. These side effects can cause weight loss or choking, and in severe cases can lead to death. Equine diastema can cause halitosis, inflammation and damage to hard and soft tissues, gingival disease, periodontal disease, and tooth loss.

The severe consequences of equine diastema can be prevented with basic, consistent equine dentistry. However, treatment does require a professional. The gaps between the horse’s teeth should be widened so that food can be more easily dislodged or “cycle in and out” and not build up over time. Most importantly, be aware that the equine dentistry treatment for diastema is not a one-time affair. Since horses’ teeth grow perpetually, it’s important to have consistent dental exams every three to six months.

If you believe your horse may have equine diastema, call Mid-Rivers Equine Centre today and schedule an appointment with one of our equine dentistry staff.