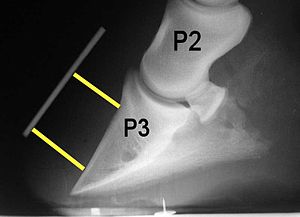 Laminitis is a condition affecting the soft lamina tissue that holds the coffin bone of the hoof in place and connects this bone to the inner hoof wall. When a horse becomes laminitic, the tissue becomes inflamed. Inflammation leads to swelling and the rigid hoof wall or capsule does not allow for swelling. Much like the pressure created in the skull with head trauma, swelling in the hoof will increase the pressure within the hoof. This increased pressure can collapse or compromise the blood supply as blood vessels are easily compressed. This compromises oxygen delivery to vital tissues and this can result in damage or death to soft laminar tissue. As the tissue dies, it no longer has the ability to hold the coffin bone in place. As the support from the lamina is lost, the coffin bone may pull away or “rotate” and this is excruciatingly painful and in most cases permanently changes the hooves for life.

Laminitis, if treated early, can in many cases be reversed before permanent changes occur. Founder is the lay term that is most accurately applied to advanced laminitis that has resulted in permanent changes and recurrent episodes of lameness. Severe uncontrolled laminitis results in the coffin bone rotation that creates crushing pressures on the sole beneath the tip of the coffin bone. Left untreated, the coffin bone can eventually pierce through the bottom of the sole exposing the bone to infection and even higher levels of pain and suffering.

Recognizing laminitis at the onset is key to treating the disease. Look for the following signs:

Laminitis is a very serious condition and can set in suddenly with no obvious cause. If a horse is running a high fever, is ill, is in a very stressful situation like colic, or is post-surgery, be on the lookout. Swift medical attention will be needed if you suspect your horse is developing laminitis. It is the second leading cause of death in horses.

Please contact your vet immediately if you suspect your horse is suffering from laminitis or have any questions about prevention.
Mid-River’s Equine Hospital is available 24 hours a day for emergencies at (636) 332-5373.